James Guthrie was the first in a long line of excellent reporters I’ve hired over the years, and not only was he one of the best writers and storytellers I’ve ever had the pleasure to work with, he was also a good friend. 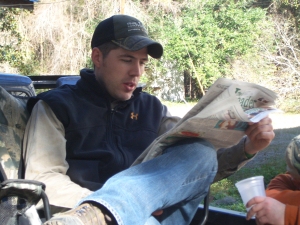 James Guthrie, reading The Oconee Leader. This may be the closest thing to a photo of the two of us together.

A year ago (April 12), I learned of his death on Facebook, which is all kinds of ironic because Guthrie was not a Facebook kind of guy. He was an outdoors, hunting and talking to you face-to-face kind of guy.

I was just finishing up my 2012 taxes. I opened up Facebook and my news feed was full of photos of Guthrie. This was a weird thing because Guthrie didn’t post a lot of photos of himself on Facebook. I glanced at the caption under one of those photos and saw a remark about how much Guthrie was going to be missed. Then I started reading all of the captions under the photos, and then I started trying to imagine reasons for people to be saying the things they were saying that didn’t involve Guthrie having died.

James was younger than me. He had two young children. He had nothing but a glorious life ahead of him, and nothing in my life’s experience helped me to get my head around the fact that he could have died so young.

I guess it made it worse, too, that Guthrie was one of these people who absolutely gets everything he could out of life. Every time we talked he had stories of new hunting adventures in Africa or South America or Canada. Or he was on his way to a gun range somewhere to play with some really cool toys that I can never hope to have a chance to shoot, much less afford.

I think anyone who knew him would agree with me: Learning that James Guthrie was dead was like a kick in the damn gut. I was torn to pieces.

A couple of months before his death I sent Guthrie a private message on Facebook. I just wanted to catch up, and because I’m always too busy for anything, I wanted to do it on my time when it was convenient to me. I wanted him to just send me a response and tell me how wonderful his life was with his beautiful family and where his next adventure was going to take him.

But Guthrie wasn’t a Facebook kind of guy, so instead of sending me a quick we’re-caught-up-now message on Facebook telling me life was wonderful and his family was beautiful, all he said was, “Call me.”

Well … you know me. Monday is deadline day at the paper and I’m up all night working, and Tuesday I sleep late and Wednesday somehow turns into Friday and Saturday and Sunday I’m on soccer fields and then it’s Monday again. At the time, too, I was finishing up Jackson Speed & The Blood Tubs and Four Things My Wife Hates About Mornings, so I was busy with books.

And then I learned on Facebook that I’d missed my opportunity.

I thought about calling him all the time. In the car, at the office, after dinner – but I kept putting it off. Not for any reason, I was just always too busy for anything.

I’ve tried very hard to live a life that minimizes regrets, and I can say with all honesty that I have a very, very few. But not calling Guthrie still haunts me a year later.

It’s easy to get lost in our own worlds – work, kids, projects, The Walking Dead marathons … whatever it is that occupies all our time.

But I would really, strongly urge you: No matter how busy you are, don’t let a good friend’s last words to you be “call me.” You’ll regret it if you don’t make that call.

1 thought on “Regretting a phone call I never made”