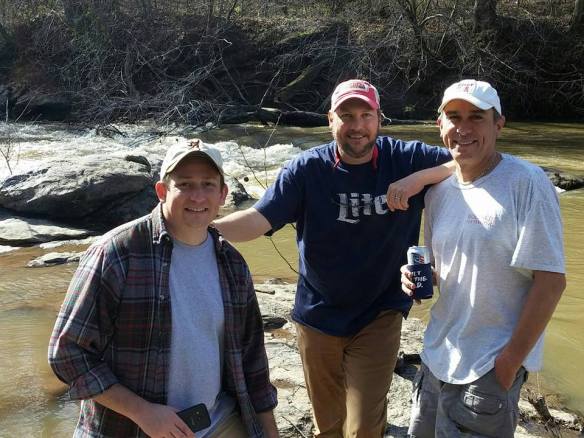 I’ve never been particularly happy with my author bio on Amazon.

It has undergone numerous revisions since I first started publishing back in 2012, but thanks to my buddy Rodney Carr (who doesn’t read Westerns) and a Western writers group that doesn’t want me as a full member, I think I’ve finally come up with an author bio I’m happy with.

Rodney is the friend mentioned. Though he doesn’t like reading Westerns, he does enjoy paddling rivers and playing soccer, so I’ve posted with this a photo of us with David Smith during one of our river trips. That’s me on the left, David center, and Rodney – not reading Westerns – on the right.

Some (what I have quoted below) of the new bio comes directly from a letter I wrote to a Western writers group.

I decided a couple of months back that it would make sense for me to join an association of writers dedicated specifically to the genre of Westerns.

I’m in several writers groups, but none of them are specific to what I write.

I went to one of the most prominent organizations of Western authors and discovered that because I self-publish my novels I am ineligible for full membership. I can be an associate member (paying the same dues as a full member), but to be a full member of this group you have to be traditionally published.

I’m pleased to say that I have been approached by traditional publishers (one of whom said he would publish “any and all” of my books). But at this stage in my career, that’s not something I’m interested in doing. This is purely a business decision on my part because I believe I can earn a better living on my own than through a publisher.

So I self-publish by choice (which has not always been the case).

I sent this organization a letter asking that they waive their membership criteria and allow me into the group as a full member.

I wrote an impassioned plea and explained to them why, in my belief, a group of Western authors should be the first to recognize Indie authors as full members (for the record, many organizations supporting authors in other genres already grant full membership to independent authors).

I acknowledged that they have every right to exclude anyone they want from their group. And … they decided to exclude me.

I could join as an associate member and pay the same dues as full members but have fewer rights within the organization.

But the impassioned letter provided me with the guts of my new author bio, so there is no loss.

Only two people in this world have an obligation to read my books whether they want to or not. Those are my wife and my mother. And they both do.

Below is the passionate part of my letter to the writers organization I tried to join. If you want the rest you’ll have to visit my author page at Amazon. Please feel free to buy a book while you are there, but only if you want to.

I am drawn to Westerns because it is the only genre that embodies the ideals that I consider to be truly American: Ideals of freedom, of rugged individualism, and of independence of spirit.

The heroes of Westerns are men and women who understand that justice and the law are sometimes two different things. They are people who make their own way by their own means, they are prideful and stand by what they say.

They are “my people,” and I consider it a privilege to write stories for them.

When I write Western novels, I’m very aware that these principles are not simply tropes in a genre but dearly held beliefs of a certain caliber of people, Americans generally, Westerners specifically, and me individually.