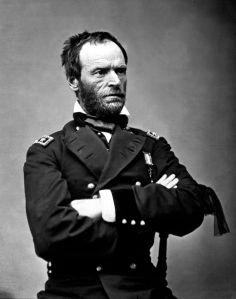 With the fire and collapse of a section of bridge on I-85 yesterday, there’s been a lot of posting about William Tecumseh Sherman in the last 24 hours.

Sherman makes an appearance in the soon-to-be-released “Jackson Speed in the Rush.” Sherman biographers will know that the Yankee general made famous for burning Atlanta on his March to the Sea will know that in 1848-49 the young Lieutenant William Tecumseh Sherman was in California and played a small role in the California Gold Rush.

I learned some interesting things about Sherman during my research, not least of which is that his friends all called him “Cump,” a shortened version of his middle name.

I’ve seen lots of jokes floating around Facebook about Sherman and the burning of Atlanta. My favorite is the photo of Sherman with the caption: “Police have released this photograph of a suspect in the I-85 fire.” Invariably, someone will post: “Too soon.”

It was common back in the old days that peacocks roamed the streets in some small Southern towns. Some people kept them as pets and allowed them to roam at will. In fact, I used to live down the road from someone who had a couple of peacocks as pets, and they were constantly coming into the yard, honking and aggravating my dog.

My friend and Old South authority said that when Sherman came through, the Yankee soldiers entertained themselves by shooting these peacocks for sport.

“They shot the peafowl,” he says, and the generational sorrow is thick in his voice.

I’m not suggesting that people shouldn’t be able to have their fun on Facebook or that there’s not some humor to the joke that Cump Sherman set the fire that shut down I-85, but don’t dismiss those who say it is “too soon” as idle jokers. Some wounds take hundreds of years to heal, and Sherman’s gash across the face of Georgia is still a raw scar.

They shot the peafowl.