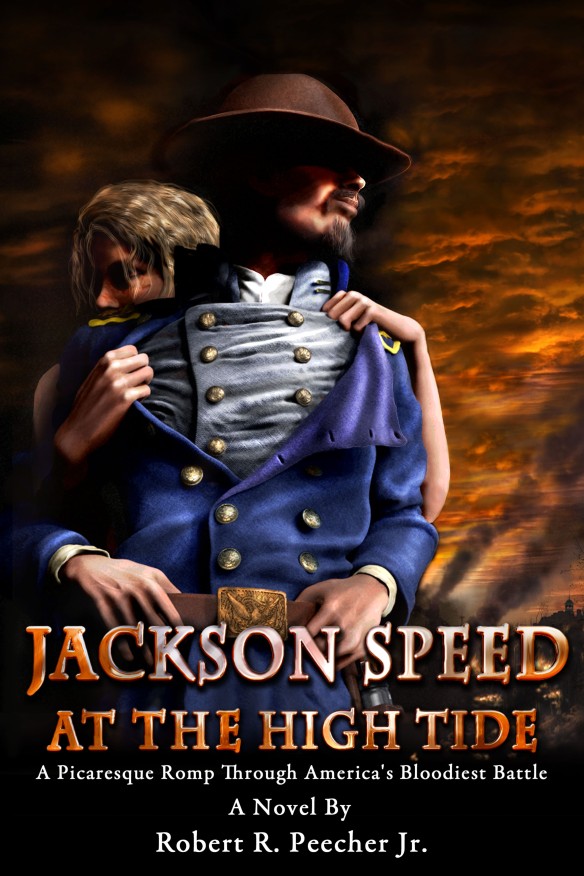 One hundred and one thousand, six hundred and thirty one words is the final word count on Jackson Speed at the High Tide (less footnotes and introduction). It tops out at a good 30,000 words more than any of the other Speed books.

I’ve finished the final edits this afternoon, and it is no lack of modesty that forces me to say it is a brilliant piece of fiction.

Fans of Jackson Speed have waited an interminable amount of time for this book, and you have my deepest sympathies. It has been an unbelievable challenge for me to get this book written and I have been as expectant as you. But, it is finally done and dusted!

And truthfully, I think you’ll find that Volume IV of the Jackson Speed memoirs was well worth the wait.

In the coming days I’ll have more information about the release date. I have to finish out some of the footnotes (there are 78 footnotes!) and the maps – which are a huge job – and then I have to do the formatting. So there is still work to be done, but the writing, edits and rewriting are complete.

My hope is to have the book published by July 1, which is the anniversary of the Battle of Gettysburg and seems a fitting time to release the book.

Above you can see the cover for the book. I’ve written about it before, but the cover was designed by Alex McArdell who is an amazing and gifted illustrator. I encourage you to check out his other work. Alex did an amazing job with the cover and I’m beyond thrilled with the way it turned out.

Fans of Jackson Speed will know that Volume IV consists of Speedy’s adventures at the Battle of Gettysburg, and they will know, too, that our cowardly hero switched sides multiple times at that battle. Alex did a masterful job of capturing the spirit of the book – the Union coat pulled back to reveal a Confederate coat; Speed’s beloved slouch hat; the tempting Jenny Rakestraw clutching at the chest of a heroic Jackson Speed. He even managed to work in the cupola of the Seminary in the background. Oh! It is brilliant!

I am so excited to get this book into the hands of readers who have come to love Speedy the way I do. In High Tide, readers can join with Jackson Speed as he flees his way from one end of the three-day battle to the next, always looking to save his own skin and, wherever possible, get belly-to-belly with whatever beautiful young woman is available. Speed takes readers from the Seminary cupola on the first day through the streets of Gettysburg as the Army of the Potomac runs for the safety of the hills south of town; he takes them up Little Round Top where he comes face-to-face with the famed 20th Maine; and on the third day of the battle, Speed takes readers across the mile-long wheat field in Pickett’s Charge to the famous Angle where the Confederacy reaches its “High Water Mark.”

And throughout, readers are treated to the humor of Speed’s unique perspective and single-minded purpose of saving his own neck. This “picaresque romp through America’s bloodiest battle” truly is magnificent.