Several months ago I became intrigued with a notion that was new to me but not, as it turns out, an original idea.

I was doing some research for a new project I’ve been working on when I formed an opinion that ebooks are the modern era’s pulp fiction. Like I said, it wasn’t an original idea, but it was new to me. 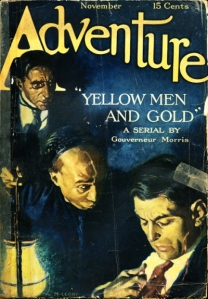 The first cover of the old pulp fiction magazine Adventure.

Pulp fiction was popular in the late 1800s and early 1900s. Often raw and almost never of very high literary value, it was published in books and magazines that used poor quality paper (which is where the “pulp” comes from). Cheap to publish, it opened the doors to a few now-famous authors and helped to build the popularity of a variety of genres (science fiction, crime fiction, thrillers) that possibly would not have been given much chance were it not for the ability of publishers to print the material cheaply.

To me, that sounds a lot like today’s ebooks.

Pulp fiction allowed writers a certain freedom from the confines of the tastes of editors and publishers. Today’s ebooks, to an even greater extent, set writers free.

I think ultimately those who enjoy reading fiction of all kinds are the ones who truly win. If you describe yourself as an avid reader, you have so much more opportunity now for fresh and creative stories.

I will grant you that quality control among the self-published book market isn’t great, and a fair number of the ebooks available are just absolute garbage – poorly written, grammatical failures and bad stories.

But the readers get to police that, don’t they? Through reader reviews and sales rankings, readers can sift through the selections available, and the good stuff is bound to rise to the top. And no different than picking up a pulp fiction magazine and flipping through it a century ago, readers have the opportunity to read the first few pages of a book or download free samples.

As a writer, the whole thing is fun and exciting to me. I’ve got all kinds of ideas for new projects I’d like to write, and the fear of failure just isn’t there. If I publish something and readers don’t care for it (giving it poor reviews or just simply not buying it), well I can just try again with something else if I decide I want to.

And for a few writers, who might have tried dozens or hundreds of times to get their work through the gatekeepers of the traditional publishing world, they have now an opportunity to reach readers that wasn’t available to them even five years ago.