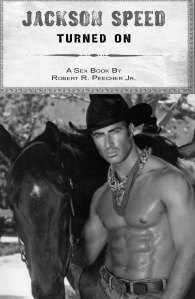 Frequently when someone talks to me about a Jackson Speed novel the first topic they bring to my attention is the sex contained within.

A friend of mine started reading the first novel, commented on the “steamy scenes” and then jokingly asked if the novel was autobiographical. The question left both of us uncomfortable.

I think it’s probably true that oftentimes a reader will walk away from a story or a book with a completely different take on it than what the writer intended, and I certainly never intended for readers to focus on the sex in the Jackson Speed Memoirs.

For me, the sex in Jackson Speed was always an integral part of the plot but not particularly memorable. Nearly every adventure that Jackson Speed encounters is prompted by some illicit dalliance with a married woman or a sexy spy or such. This is a necessary tool for me to employ, because Speed is such a coward that he would never get into any of his adventures if not thrust there by a romantic escapade or lured there by a lewd lady.

Consider if Jackson Speed were simply a coward and not an adulterer: There would be no enraged Uriah Franks (El Teneria), no trip to Baltimore (Blood Tubs), no tangential journey to Chancellorsville (Orange Turnpike), no life-long feud with Dan Sickles (Da Pont Diamond). Our hero would likely be nothing more than a blacksmith in Scull Shoals, Georgia, and what entertainment could possibly come from those memoirs?

And so the sex was only ever intended as a device to find our rascally hero embroiled in his plots.

At the same time, the novels are held out to be the memoirs of an aged Jackson Speed, and I thought it was a fun thing to have the old man greedily recalling his conquests – the pinched nipples, the heaving bosoms, the round bottoms with a pink palm print.

But I never really thought the sex was explosive or depraved or graphic.

Still, readers often bring up the sex first – and sometimes nothing else.

It would be nice, periodically, if someone wanted to discuss the well-researched history.

“I never knew that Stonewall Jackson’s glorious victory at Chancellorsville was achieved by the chance happening of Fitzhugh Lee finding a path in the woods from which he could see Hooker’s exposed flank,” a reader might say.

“Oh, yes!” I would respond. “Had it not been for Fitzhugh climbing that hill, Stonewall would have attacked along the Orange Plank Road. Likely he would have still achieved a victory, but he would have been attacking a more entrenched position and it would never have been such a rout!”

But it may be that my novels are more graphic and more depraved than I realize because my sensibilities are rougher than those of polite society. I blame it all on the desensitizing I experienced in Mr. Kirkland’s social studies class in eighth grade.

When I remember back so many years ago to the eighth grade, I remember two things. I had a terrible crush on my science teacher Ms. Hosch and I was exposed to one of the most graphic, explicit sex books that any 13-year-old could possibly endure.

It was the spring of our eighth grade year when one of the girls in the class brought a book that was – if I remember correctly – stolen from her mother. The book was the ironically titled “Wife Turned On” by Heather Brown. It was nothing more than one explicit, pornographic story after another of a woman who had sex with everyone except her husband.

We eighth graders in Mr. Kirkland’s class had removed the cover of the book and for what I remember as weeks (though it may have only been days) passed that book around the class. The sex scenes – which were many – were marked with turned-down corners and we passed the book around class so that everyone had the opportunity to quickly find and read them. My goodness. It was a lewd and graphic introduction to a topic most of us knew very little about.

So perhaps if you’ve not had the benefit of reading the marked pages of “Wife Turned On” in the back of Mr. Kirkland’s eighth grade social studies class, Jackson Speed does seem a bit raw to you. For me, however, the novels are a very tame tale of a scoundrel’s historical misadventures and are chocked full of interesting tidbits of history and fun exploits.

As it is, I must simply accept the fact that I have created a sex monster, and it is far too late to put the fiend back in his cage. And if it is the explicit sex that keeps readers coming back for more, then I’ll continue writing about the pinched nipples, slapped bottoms and insatiable spies.

But please, don’t ask me face-to-face if the stories are autobiographical. The question – if not the answer – will leave us both embarrassed.

I love to hear from Jackson Speed fans! If you don’t want to ask me any personal questions about my sex life, please feel free to send me a message here: