As I conduct research for my Jackson Speed novels, I am always learning bizarre little tidbits from history, some of which I try to incorporate and others I just enjoy for what they are.

For instance, were you aware that U.S. Grant wore a dress during the Mexican-American War?

The story is related by James Longstreet in his memoirs From Manassas to Appomattox. 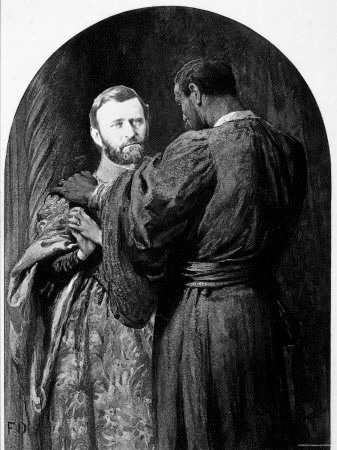 Sam Grant as Shakespeare’s Desdemona in the Moor of Venice.

Longstreet and U.S. Grant were together at West Point. Grant graduated a year behind Longstreet. As young lieutenants fresh from the military academy, both were appointed to the Jefferson Barracks in Missouri. A lifelong friendship developed.

Longstreet was with Grant the first time he met Julia Dent (who became Grant’s wife). After the war, when Grant was president, he appointed Longstreet to a variety of government jobs. The two were close friends, despite having fought on separate sides during the War of Northern Aggression.

When the war drums started to beat in the new Republic of Texas and the United States seemed intent on answering their call, Grant and Longstreet both were ordered from the Jefferson Barracks to serve in the Mexican-American War.

Grant, particularly, distinguished himself in that war and was brevetted for valor.

But before the shooting started, there was much down time. In Missouri the young officers were accustomed to balls and hops and gay society. Down on the plains of Texas, there was little to relieve the boredom of waiting for the shooting to start, so the officers formed a small theater where they put on several performances.

They raised enough money among themselves that they were able to build a theater. Longstreet says that the performances were popular and that “the house was filled every night.”

Soon the young officers had money enough to buy costumes.

When they decided to perform The Moor of Venice, Grant was selected to play the part of the daughter of Brabantio.

So there he is – the future president of the United States, the man to whom Lincoln would turn to finally conquer Robert E. Lee and the Army of Northern Virginia – wearing a dress and playing the part of Desdemona.

But Sam Grant wasn’t long in a dress.

Lieutenant Theodore Porter played the part of Othello, and apparently Grant served as too poor of a love interest to inspire Porter’s acting abilities. Porter complained that male heroines “could not support the character nor give sentiment to the hero,” Longstreet says.

So the officers sent to New Orleans and secured an actress, Mrs. Hart, to come and “give sentiment” to Porter.

Porter was killed soon after by Mexican banditti.

I love these scenes from history that have been left out of text books and largely forgotten. These are the events that tend to humanize the people whose names you had to memorize in high school history classes.

And for me, I think it gives me a better ability to show my readers Sam Grant through Jackson Speed’s memory if I always keep in the back of my mind that Grant not only wore a dress but made such a poor woman that he failed to inspire Ted Porter.